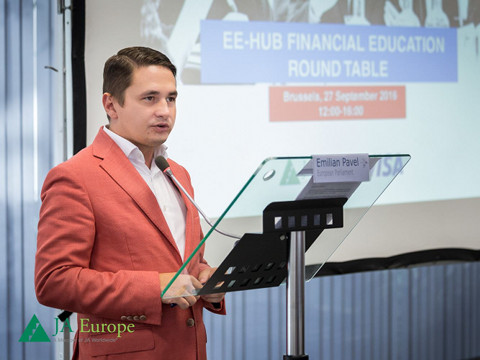 I was deeply honored to deliver the keynote speech at the EU-HUB’s Financial Education Roundtable in Brussels this week. Congratulations Junior Achievement Europe and thank you for inviting me! Your organization is doing a splendid job in an area very close to my heart and you have all my support!
For those interested, please read my remarks below.

So, what is financial education?

That is a good question, and one that has many different answers depending on who you talk to. For some, financial education means teaching people how to save money, or how to get bank loans or manage savings plans. For others, it means teaching them how to invest in the stock markets, how to open a credit line or get funding. But whatever your definition of financial education, it seems clear that there’s one thing we can all agree on: financial education is nearly non-existent in many schools across the European Union.

In my opinion, the objective of financial education should be to allow young people to achieve financial literacy and develop various financial skills and competencies. This needs to be done from an early age as it will bring benefits to both their professional and personal lives, no matter if they become employees or entrepreneurs. Due to the increasing complexity of the financial markets, the ageing European population and the development of the digital world that makes money practically virtual, young people are in a vulnerable situation, and I am a firm believer that financial literacy is a vital skill for the 21st century.

As for how would financial education in school look like, well, I believe first and foremost that it is important to deliver it through real life experiences. Theory is excellent and necessary but without case studies and practice it can never be fully understood. I therefore fully support programs such as the ones promoted by Junior Achievement, where young people can practice what they learn. This gives a clear purpose and a real feel to their process of learning.  I am also a big advocate of the private sector and the civil society being involved in financial education, as they can bridge theory and practice, and keep the education sector up to date with the real business world. Of course, this means that we also need to open up financial education and ensure that formal and non-formal education both deliver such trainings.

Also, when talking about money, I strongly believe young people need to know and need to be aware of the fact that there is always an element of risk. What they need to learn is how to minimize and manage that risk.

And last but certainly not the least, I believe it is impossible to learn without making mistakes along the way. The key is to learn the lessons of those mistakes, and not to let them discourage you. Young people in Europe need to be taught to look at failure as a learning opportunity not as a shameful exercise.

I believe that the 2008 financial crisis should have been a “wake up” call for many educational systems. As many families lost their homes, and parents lost jobs, schools should have begun to appreciate the importance of young people gaining knowledge in the world of finance – about personal and career decisions, as well as about how various financial decisions taken by a government or a financial institution, directly affect their lives and future prospects.

I’ve recently read a very interesting article about a civic education program in Canada called “Student Budget Consultation”, and I want to share some of the points that were made there. It is an inspiring example of how to get students engaged and motivated in the world of finance.

Each year, students get to debate national budget issues, in real time, and to hear from the real decision makers about the hard choices that have to be made. Students get to look at the facts, hear opinions from politicians, business leaders and other interest groups, debate budget priorities with fellow students, and then express their own views using a survey tool.

The results are then collected from schools across the country and consolidated to create the Student Budget, which expresses the collective views of students on the country’s spending priorities. A small group of students then gets to present the Student Budget on behalf of all the participating schools to the Minister of Finance in Ottawa and to have a more in-depth discussion with the Minister’s advisers.

Students said that being part of Student Budget was their first exposure to the world of finance. Having political leaders, who they were vaguely familiar with from watching TV, speak directly to them in their classrooms (via video recordings), and having the opportunity to deal with real life issues, had quite an impact on their thinking, sparking their interest in finance and public affairs and, in some cases, changing the direction of their future studies and career choices.

Interestingly, it was also found that teachers very often don’t know much more than their students about the topic, so significant investment was needed to improve teachers’ own understanding of economics and finance. Despite a certain fear factor, however, there was no shortage of teachers willing to get involved and consequently the program has expanded rapidly, with support from provincial governments and non-profit organizations dedicated to civic education and economic education.

In Boston, an initiative by the City Council called “Youth Lead the Change: Participatory Budgeting” empowers young people to participate in the budget consolidation process – by allowing them to decide how $1,000,000 of the city’s budget should be spent. First, a group of 30 youth organizations created a rulebook, then assemblies were held across Boston to generate ideas and a core group of young people turned those ideas into specific proposals. Finally, a vote was held to determine which proposals would be funded.

Real life scenarios, involving real people and events were much more engaging than dreamt-up case studies. And, interactive learning through debate, role plays, and use of technology draws students in.

In an increasingly risky and globalized marketplace, young people must be able to make well-informed financial decisions. But they also need the courage to start new projects, to take risks! And I don’t want to end my remarks today without some mentions of something that we all care very much about: the need for more entrepreneurial spirit in Europe.

Entrepreneurship is vital to growing markets. And across most of Europe, entrepreneurs face huge difficulties starting up a business or growing it because of poor access to finance. I believe that one of the reasons why there is a limited financial support to entrepreneurial initiatives is due to poor macro-economic conditions, which push investments away from the Old Continent or re-direct all the available capital into savings rather than investments. In 2013, the Global Entrepreneurship Monitor found that in Europe’s largest economies, only 6% of the working population set up or ran a new business. By contrast, in BRIC countries and the U.S., 10%-17% engaged in this kind of early-state entrepreneurial activity.

But I’d also like to make a point about Europe’s necessity for innovative, disruptive entrepreneurs. In my opinion, the EU needs to invest in an entrepreneur-driven innovation ecosystem. European businesses and governments must work together to develop a new entrepreneurial innovation model. Europe must shift its understanding of entrepreneurship away from a simple, small scale, profit-driven model towards a model driven by value-seeking, disruptive entrepreneurs, which are able to generate new products and markets and naturally new quality jobs. This will keep Europe away from a consumer role and into a leadership role on the global marketplace.

The disruptive entrepreneurs are different from small business entrepreneurs because they have different modus operandi: rather than merely seeking profit, they overturn existing networks and structures, and create value and new markets. They innovate and redefine entire spaces in the economy. The innovation driven entrepreneurs generate a new gravitational pool of other innovators, incubators, business angels and crowd-funders. And this ecosystem is an incredible generator for growth. We need more of this in Europe urgently!

But building an entrepreneurial ecosystem requires action from multiple stakeholders, including governments, corporations, start-ups, private equity, research labs, and universities. What I believe we need to do, as policymakers, is to initiate and foster the facilitation of such an environment. How?

For example, by tackling burdensome regulation, cutting the red tape, without, of course, damaging employees’ protection. I’d also like to make a plea for these entrepreneurs for better access to finance, and I very much hope that the European world of finance will support entrepreneurs much more. Also, through more accommodating laws, collaboration, and technology, policymakers can bring researchers, entrepreneurs, and public servants together to identify opportunities for disruptive economic change to improve our Europe.

And it is this environment that our young generation needs to be exposed to. They need to practice this from an early age, they need to be taught or simply allowed to dream big, disrupt, be entrepreneurial, take obstacles as simple challenges to overcome, and they need to be involved in our society’s affairs as early as possible. Financial and entrepreneurship education can and should facilitate this.

Emilian Pavel was born in Salonta in 1983 and grew up in Oradea, a city in the North-Western region of Romania. He graduated from the ''Emanuil Gojdu'' National College and studied at the University of Oradea with a specialisation in engineering. He also holds a Master's Degree in environmental protection. Proficient at German, Emilian Pavel has worked with various German and Austrian investors in Romania. He has been involved in politics for over 12 years and he is one of the Vice Presidents of the Young Romanian Social Democrats organisation.

Emilian Pavel is now a Member of the European Parliament, working in the Committee of Employment and Social Affairs, and the Committee of Civil Liberties, Justice and Home Affairs. He is also a member of the Delegation for relations with Israel, Delegation to the EU-Serbia Stabilisation and Association Parliamentary Committee, Delegation to the Parliamentary Assembly of the Union for the Mediterranean. His priorities in the European Parliament include youth entrepreneurship and employability, lifelong learning and education, Digital Agenda, and regional development.